So here we are looking at Matt 24:45 and scratching our heads. Who is the faithful and discreet slave??

What if we had nothing to aid our understanding? No one to explain?  Could we figure it out just from the pages of the Bible?  Let’s try!

How can we do that?  We have to look at the context.  Here we go...this will be eye opening! Follow me.

Jesus opens Matt 24 by describing the signs of the end and of his coming.

(As a side note, NWT uses the word “presence” instead of “coming”  in these chapters. This word choice brings thought to the JW doctrine of Jesus’ invisible presence starting in 1914.  You may notice as we read that, in context, the use of the word “presence” becomes awkward since Jesus is clearly describing a sudden event,  happening at a certain unexpected moment…not a prolonged period of time).

Our topic starts to gain speed at vs 27 When Jesus likens his coming to lightning:

Here, Jesus begins talking about his unexpected and sudden return.

When he comes, everyone will see him. The Son of Man! (Not an angel named Michael?)

He continues talking about the surprise factor.  Nobody knows when it will be!

Now He expounds on the unexpectedness of his coming by comparing it to the flood which took people by surprise. 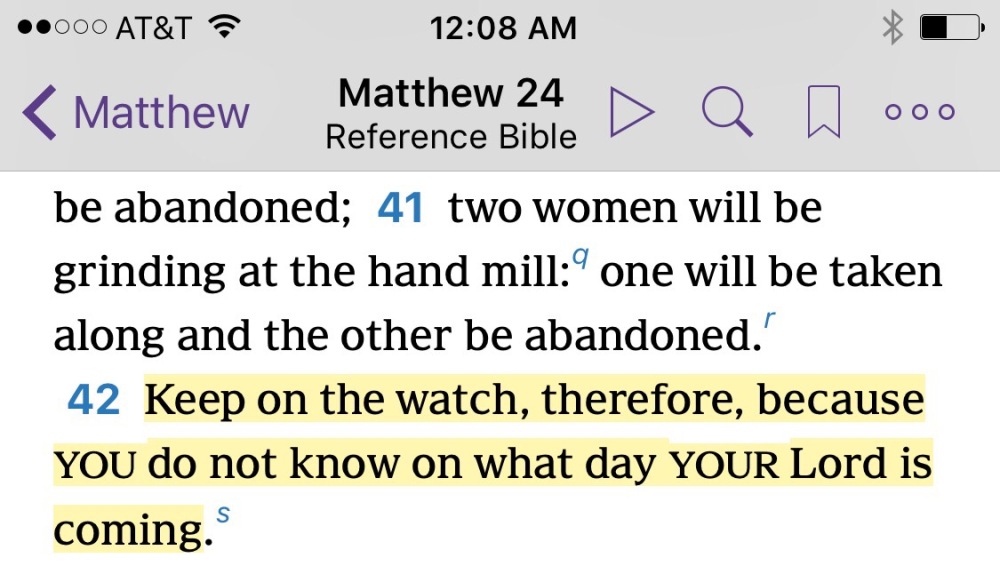 He warns his audience (which includes me and you) to be ready …because you never know when he will arrive! 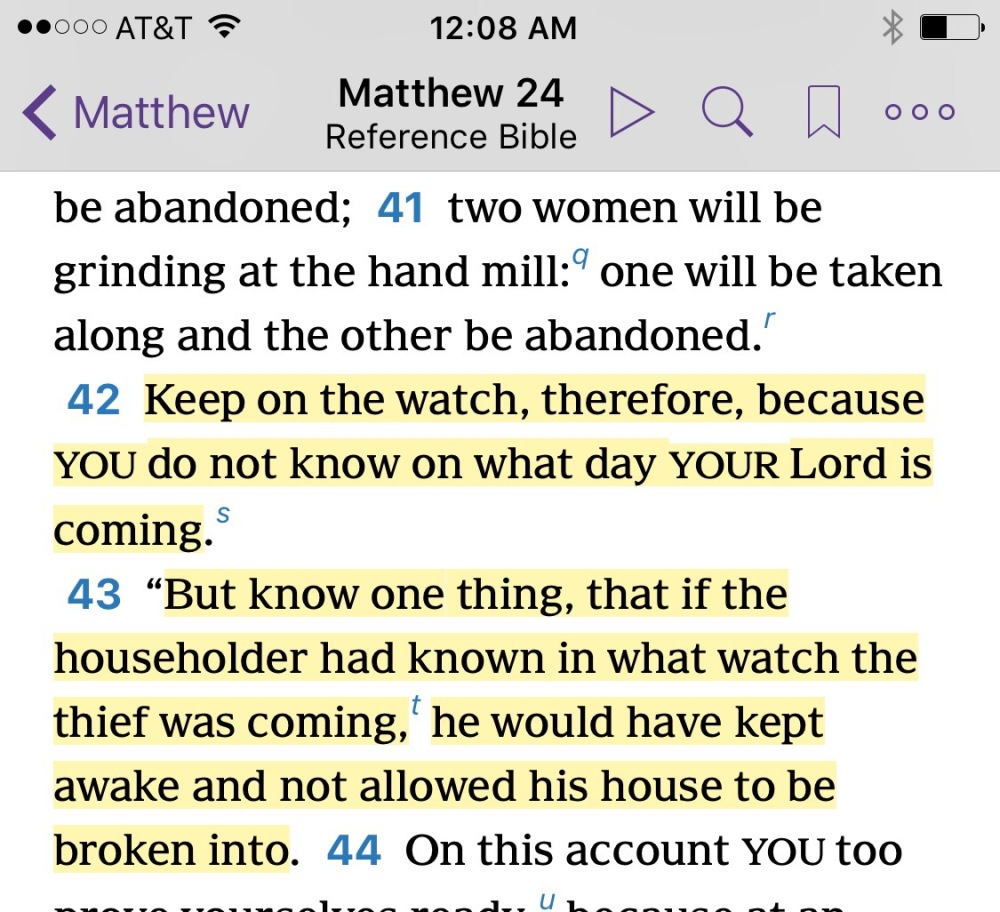 See? He brings it Back to “you.”  He really was comparing “you” to the householder.  I wasn’t making that up 🙂 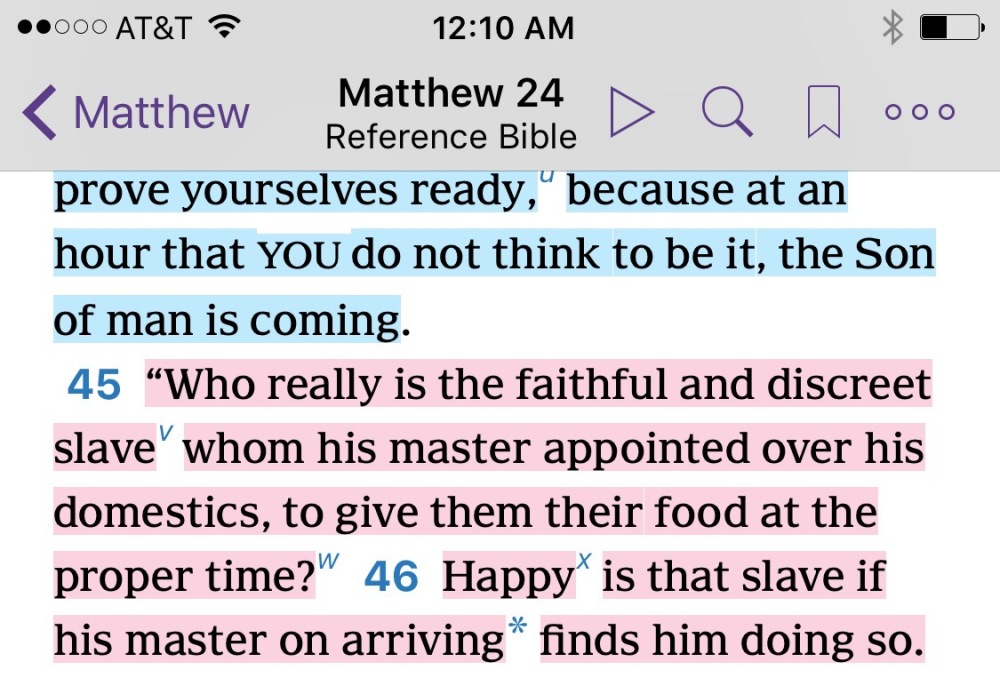 Hey! There’s our question! Who is the faithful and discreet slave??

Just for fun, here’s the verse in a couple other translations:

I know.  The suspense is killing you.

Back to the context.  Jesus has warned us of his sudden return and told us not to be like a householder who sleeps when the thief comes.  Now he talks about a slave.  Let’s see what he says.

Here’s a slave with two possible endings to his story based on the choices he makes while his master is away.  If he’s obedient, he ends up happy.  Poor choices, on the other hand, earn him the title of “evil slave” resulting in his punishment at the master’s return.

Here comes the next parable:

Now we’ve traded the discreet slave for discreet virgins. But the story is the same! Some virgins are wise, some aren’t!  And when the groom drops in at midnight, only the wise ones go into the feast! The door was shut on the others. 😦 (doesn’t this remind you of Noah and the ark? …It should, since Jesus compared his coming to the flood)

So we conclude that this parable is also about “you.”  Are you a wise virgin or a foolish one? Are you a sleeping householder or an awake one? Are you a….(well let’s not say it quite yet.  let’s look at the next thing Jesus says)

This traveler trusted all his belongings to his slaves…(Hey, that parallels the faithful and discreet slave who was appointed over the domestics).

He gives talents to the slaves.  Some invest wisely and some don’t.

The master took a long time (another parallel).

When he came back, the faithful slave got a pat on the back …he was given charge of even more talents (another parallel to the faithful and discreet parable. When that slave was found doing right, he was put in charge of everything).

Jesus finishes out the chapter saying, “When the Son of Man comes in his glory, and all the angels with him, he will sit on his throne…”

He then talks about the judgement and his separation of the sheep and the goats.

Back to our Question. What does the context prove to us?

Who is the faithful and discreet slave? Well…he’s the one found doing what the master told him to do when he returns.

But the parable begs a more personal question.  One implied by all of the parable examples Jesus gave:

What will you do while your master is away?

Are YOU going to be the faithful slave or the evil slave?

The SLAVE is YOU!