Commas can be life changing. I mean, for the thief next to Jesus, it was the difference between paradise today or paradise thousands of years in the future.

Before we talk about the comma, though, think about what comes after it.

“You will be with me in Paradise”

Jws believe Jesus will reign over paradise earth from heaven. But he told the thief he would be “with him” in paradise. How do Jws make that work?  Jesus would need to be on the earth in Paradise in order to be with him there.

Back to the comma.

Did you know the NWT is the only translation that says “Truly I tell you today, you will be with me in Paradise”?

All the others say “Truely I say to you, today you will be with me in paradise”

We know Jws believe paradise refers to a future eden-like earth.  And they translate this verse based on their doctrine.  But, my question is…what is the text actually supposed to say?  But before we get to that…

Did you know the word “paradise” occurs only 2 other times in scripture?  One is 2 Cor 12:4 where Paul talks about someone being caught up to paradise in a vision.   The other is Rev 2:7 talking about the tree of life which is in the midst of the paradise of God.  We also know that the tree of life grows by the river that comes out of the throne of God in Heaven. Rev 22:2

Did you also know that the term “paradise earth” is not in scripture? The only use of the word paradise seems to be another term for heaven…or a specific place in heaven.

But back to the subject. Should the comma be before “today” or after? Is NWT correct or are the rest of the translations correct?  How can we know unless we speak Greek?  Let’s do like we did in kindergarten and put on our thinking caps:

Seems like Jesus said “truly I say to you” some other times in the Bible.

I looked it up. He said “truly I say to you” 45 times. I will spare you the list…but a simple search will find them. Here’s a screen shot of some NWT examples

Big thing I noticed:  Jesus never included “today” as part of the phrase.  Instead, he would say “truly I say to you” and then he would say the thing that was true. So, adding “Today” into the first part of the sentence does not fit with the way Jesus always used it.

Another thing I noticed: NWT uses the word “tell” instead of “say” in this one instance. Could this word be translated “tell” instead of “say?”  Of course. It’s translated “tell” in many translations. They mean the same. Whats suspicious is the same word translated “say” in 44 other places, is rendered “tell” for this special occasion in the NWT.   What benefit would this have for the NWT?   Well…for one thing, in a search it doesn’t come up exactly the same as the rest.  It separates this particular occurrence of the phrase from the others. It makes us think…oh, there must be something different about the way Jesus says it this time so we can’t compare it to the other times. But no. It’s not different. In fact the only difference (highlighted in yellow below) is the fact that the “you” that Jesus is telling the truth to is a single person instead of plural. Usually he is speaking to a crowd or to a few people. This is the reason there’s a small word difference in the Greek.   (See the photo below for some comparisons).  The word for “say,” however, is the same.  They changed it to “tell” because they want this verse to be perceived as different so the connection might (hopefully) be missed. 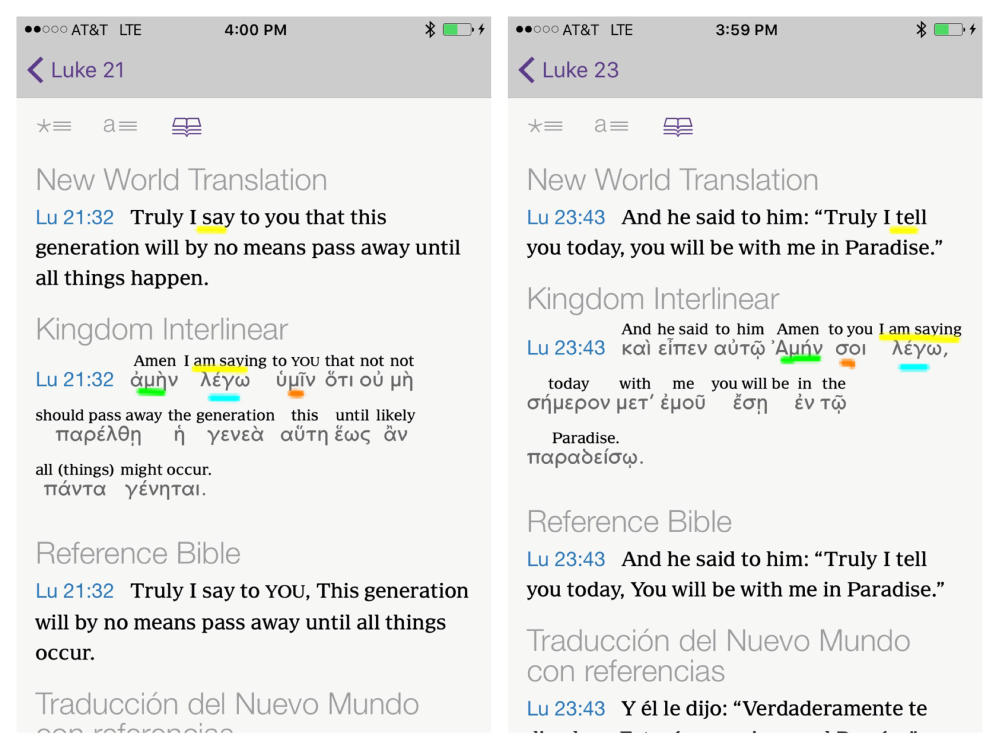 Also just to drive the point home a little more, the new world translation translates another verse directed at a singular person (nicodemus) as “say” and not “tell”. So that must not be the reason they changed it either. But as you can see the Greek words are the same as they were when Jesus was speaking to the singular thief.

So my conclusion is the NWT bent over backwards To use a loophole (that punctuation is not present in the Greek and has to be used at the translator’s discretion when translating to English) in order to support a doctrine that is unique to them even when NOBODY who translated an English translation agreed with them.

Jesus was telling the thief that he would be with him that day in Paradise. It agrees with Paul’s statement that to be absent from the body is to be present with the Lord. 2 cor 5:8

Here’s an added question someone brought up after reading this:

How can the thief be with Jesus in paradise since he is presumably not one of the annointed and they don’t believe He is omnipresent?